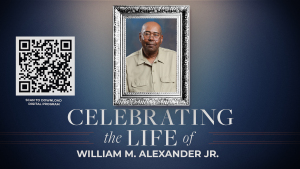 Mr. Bill peacefully transitioned into his eternal reward on Wednesday, September 14, 2022. He was born on July 31, 1943, to the late Vandelia and Deacon William Manning Alexander, Sr. in Norfolk County, which is now known as Chesapeake, Virginia. He was raised in the Bells Mill section of Chesapeake. When he got married, he moved to the Berkley section of Norfolk to raise his family. He would later return to his childhood home to live out his golden years.

He gave his life to Jesus Christ at the age of 14 and became a member of his parent’s home church, Mount Lebanon Missionary Baptist Church, which was located at 860 Bells Mill Road. Mr. Bill was a faithful servant at The Mount for 65 years, serving as a trustee as well as working in transportation, facilities, and maintenance.

Mr. Bill was a graduate of Crestwood High School and Norfolk State College. He played football at both schools and was nicknamed “Big Al”. As a young boy he worked at Alexander Groceries, his father’s neighborhood grocery store, located at 926 Bells Mill Road next to the family home. On January 7, 1965, he entered into Holy matrimony with Mildred Parham. From this union five children were born. He was employed at Chatman Funeral Home starting as an apprentice, and then becoming a mortician. He also worked at BOC Welding Supply Company where he retired as a delivery truck driver after 27 years. He came out of retirement to become the Chief of Maintenance at The Mount.

Mr. Bill was known for his kind and generous heart, chill personality, and funny sense of humor. He was a great husband and family man with an exceptional work ethic. If he gave you a hard time that meant he liked you, and standing at 6 foot 3 inches tall, he loved telling short people jokes. He took extreme pride in his Chevrolet Silverado in which he enjoyed cruising down Bells Mill Road, never ever exceeding the 25-mph speed limit. He enjoyed watching TV until the TV was watching him. He loved reading issues of Grams of Faith and American Funeral Director, and watching documentaries and crime shows such as: First 48, Chicago PD, Nightwatch, Dateline, and Law and Order. His favorite football team was the Washington Commanders. He will always be known for his sayings, such as, “Bill don’t do that,” “I’m a busy man,” answering his phone saying, “Yo, tell it!” or “State your business.” He had a different name depending on the person who was talking to him. His name could be: Dada, Billie, Mr. Bill, Uncle Beech, Big Al or Bumble. But to everyone he was, and forever will be, a GREAT MAN OF GOD.

The service will be livestreamed at:  Youtube Link: https://youtu.be/deaPvu07w4M

To send flowers to the family or plant a tree in memory of William "Mr. Bill" Alexander, Jr., please visit our floral store.

A Memorial Tree was planted for William "Mr. Bill"

Join in honoring their life - plant a memorial tree